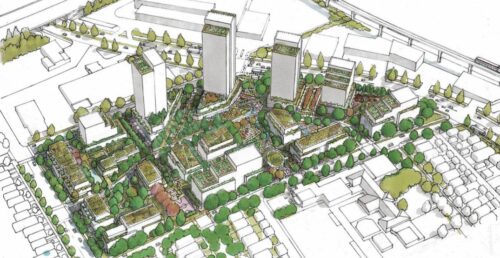 David Eby, the clear favorite in the race to become BC’s next premier, has announced plans to create an aggressive new public housing development entity that will build affordable housing suitable for the vast majority of residents: middle class households.

Through the initiative, called BC Builds, there will be “a substantial expansion of the government’s role in facilitating the delivery of middle-class housing that people can actually afford.”

He specifically highlighted the public housing systems of the island city-state of Singapore, the city of Vienna and even Whistler as examples of what will be achieved by BC Builds. The Whistler Housing Authority in the Resort Municipality of Whistler, for example, has approximately 2,100 affordable owned and rented units, providing key housing supply for the thousands of employees who work for tourism and hospitality businesses in the city.

Under BC Builds, the provincial government will work with municipal governments, private and not-for-profit developers and First Nations to build multi-family housing developments that middle-class households can rent or buy. This would be achieved through rapid permit approvals, increased permitted density, and increased public funding for land acquisition and construction costs.

The provincial government will review lands it owns to support the goals of creating additional housing through the BC Builds initiative.

The affordability of these BC Builds-driven homes will be maintained by placing these projects under co-ops, community land trusts, and shared equity partnership models.

“Using tools such as zoning of certain plots in participating partner municipalities, in combination with favorable government lending rates, and coupled with expedited approvals – and for certain public land projects – will result in significant cost savings aimed at further reducing housing costs for people living in these units,” reads its platform.

“These units will only be available to residents of British Columbia with eligibility determined by working with partner municipalities to determine local priorities.”

It is not immediately clear whether BC Builds would report to provincial Crown corporation BC Housing.

Although BC Housing is best known for its work in social and supported housing for very low-income and homeless people, it already has programs such as HousingHub, which helps for-profit and non-profit developers build middle-class housing that is either affordable rental units or affordable below-market homeownership units. Due to its initial success and rapid adoption, HousingHub’s funding was replenished with an additional $2 billion in the spring of 2021.

Eby’s BC Builds proposal is just one piece of his broad housing platform, which includes various other supply generation measures through zoning and changes to the development permit review process. municipalities, and demand-driven interventionist measures, including a new reverse tax regime.

Eby is the MPP for Vancouver-Point Grey. Last summer, he resigned as BC attorney general and minister responsible for housing to join the BC NDP leadership race.

BC NDP members are expected to choose Eby as their new party leader later this fall, and effectively the province’s new premier to replace John Horgan, who has decided to step down. Climate activist Anjali Appandurai is Eby’s only challenger.