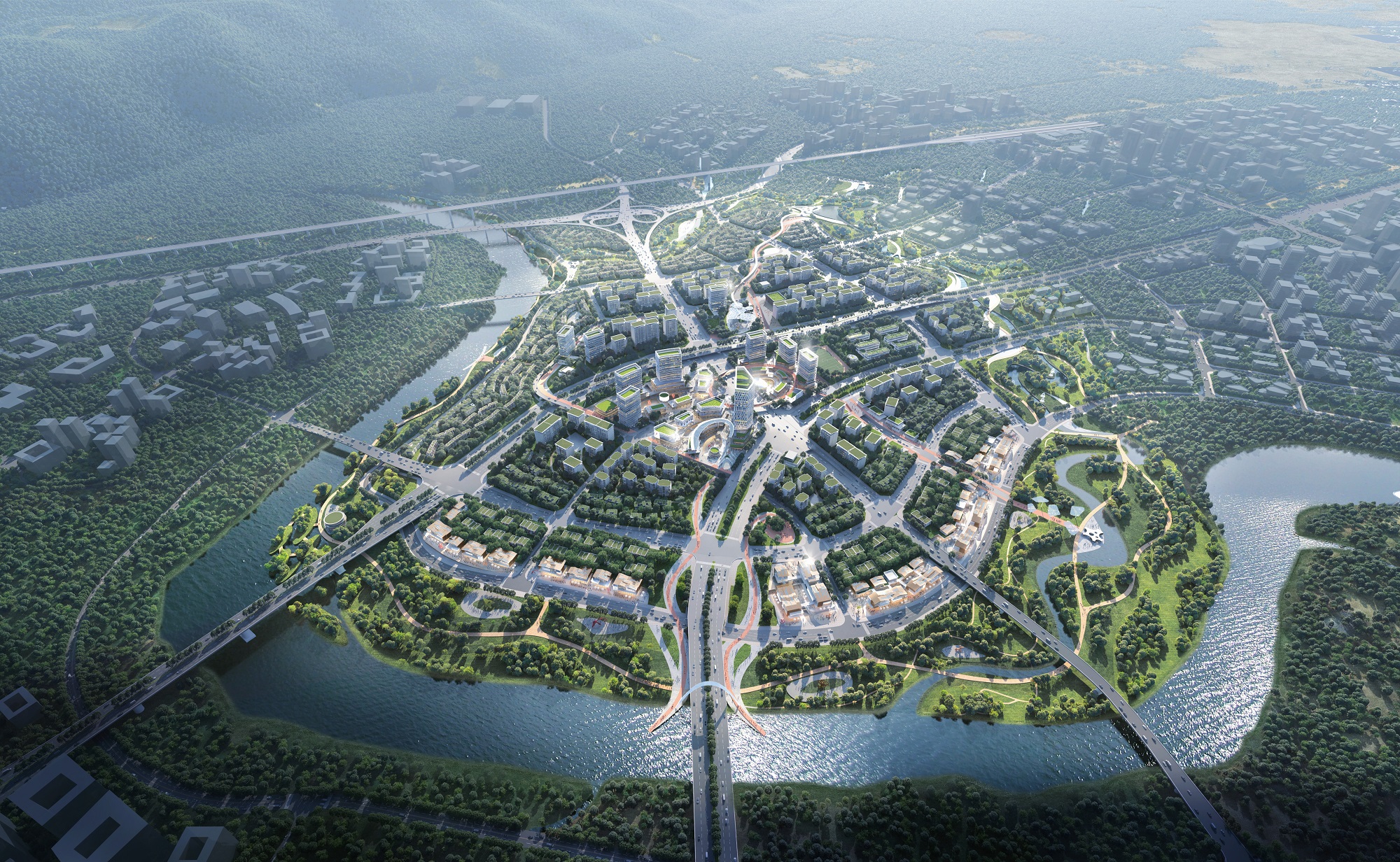 The relevant area is located in the heart of Longsheng Area, one of the three major sub-centers of Chongqing New Town, surrounded by a number of high-tech industries. Close to parks and major railway stations, the project site is also surrounded by three rivers, forming a peninsula surrounded by beautiful landscapes.

A future city between nature and urbanity
Overall, the project is planned with the structure of a central ring, an outer belt and various lanes. The center is attached to a metro line to create a core TOD commercial territory, around which revolves a functional crown that compensates for the fragmentation caused by high speed, hosting a shopping center as well as various collective public service functions. A set of themed paths connects the inner region to an outer green belt containing public commercial and entertainment spaces, which opens a channel between nature and the urban landscape.

The design creates a tiered vehicular circulation system that responds to the height difference of the site, combined with a sprawling walking system to form an efficient three-dimensional network connecting all the plots.

Three thematic hollow squares are strategically placed in the central area where there will be a dense flow of people, designed as the location of each individual retail block, all of which are connected to the subway entrances. The fluidity of traffic, the vast panoramic area and the varied commercial formats enliven the heart of the region with liveliness.

Meanwhile, boutique hotels, LOFT offices and elite apartment towers recede from the platform and are arranged around plazas overlooking the urban vista; carving out the roads and dominating the streets, they complement the central area as a 24-hour active cityscape.

With the transit station as its foundation, the design constructs a three-dimensional walkway system. It leads traffic from the metro system to commercial and public space, while extending the connection to the outer green belt park as well as the landscape bridge. The diverse business background enlivens the area and helps direct flows between plots. The landscape bridge connects and circulates the three retail blocks above ground level, and is the distinct landmark and attraction of the entire project. The open circular design allows people to travel light and unhindered within the area as well as to surrounding venues and communities.

“By basing the design on TOD and incorporating multiple functions that are perfectly delineated without separating them from nature, we hope to create future-oriented architecture that embodies the notions of vitality, dimensionality, ecology and technology. ” — Yao Chun Wen, Executive Director of Aedas.