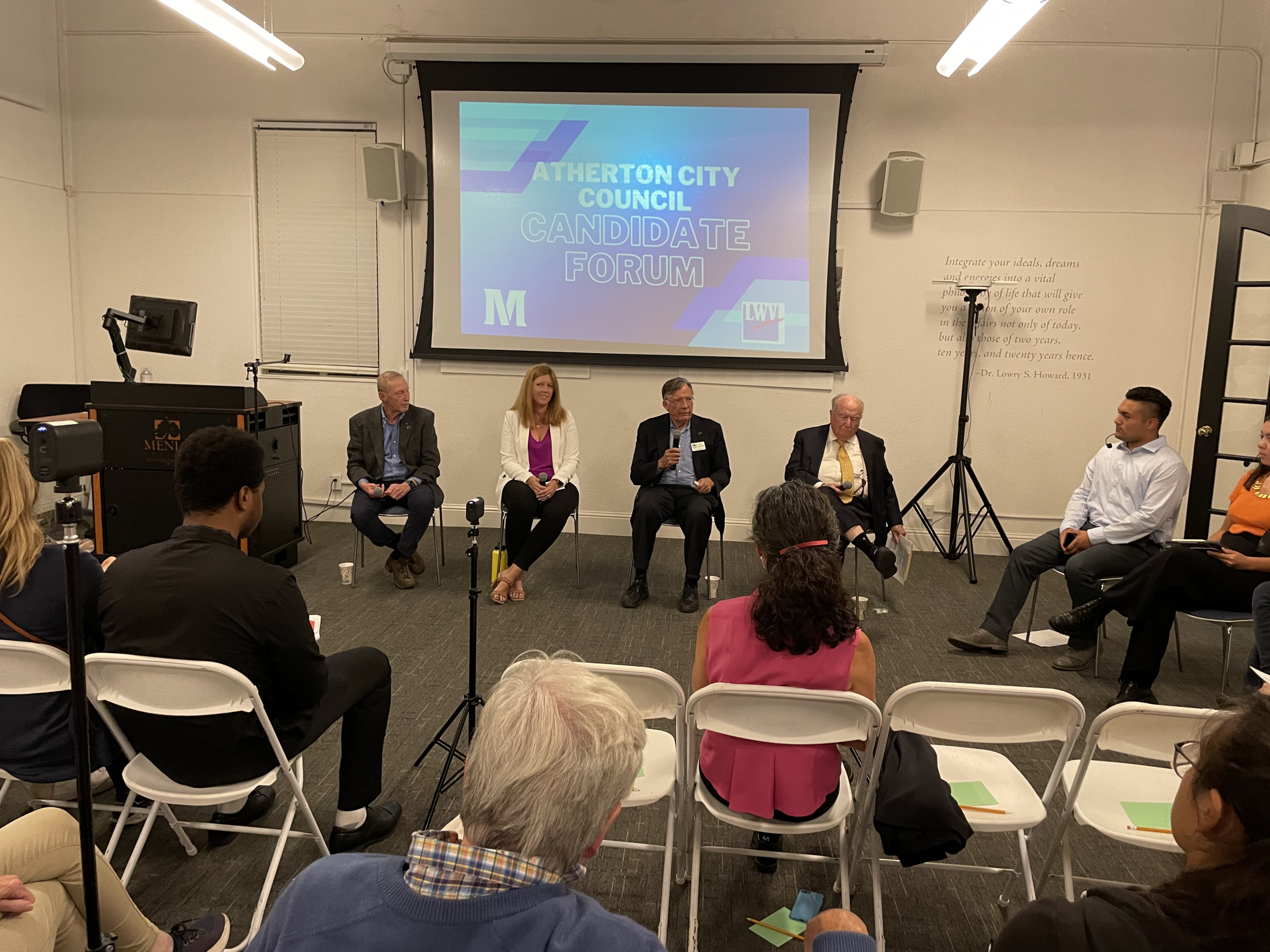 About 35 people attended a forum organized by the Menlo Civic Engagement Coalition, a student group working to increase student civic engagement and voter turnout, and the League of Women Voters of South San Mateo County. Diana Guardado, a political science graduate from Menlo College, and Joshua Villalva, a management graduate, moderated the forum. The students asked prepared questions, as well as written questions from the audience.

In August, the city submitted its Housing Element Project, a roadmap for accommodating future development over the next eight years, which included a significant increase in the number of units it must plan. The city expects to receive comments from the state by early November. The town plan relied heavily on owners building secondary suites in their backyards and dividing lots.

Menlo College Dean Melissa Michelson noted in a news release for the forum that Menlo College students, along with resident faculty and staff, make up the largest voting bloc, about 500 of the city’s 5,000 eligible voters. town.

“That means the votes of the Menlo College community can decide this election,” Michelson said.

Widmer, a former assistant professor at the college, said it’s in the city’s interest for Menlo College to build more on-campus housing. Widmer said several residents would be interested in making a potential donation to make the project happen. He noted that newer dorms on campus don’t count toward his state housing goals because he doesn’t have individual showers and kitchens.

“We were pretty upset about it,” he said.

DeGolia said Menlo College needed staff housing and the board wanted to support the school to make that happen.

“It’s all about the money,” he said. “We have met two developers interested in this (project). It is a problem of financing, but it is doable. … There is nowhere more important than in schools to build housing, so that they can live locally and not have to travel.”

Widmer referred to the fact that the city council will vote at a meeting on Wednesday, October 19 to support a project to install cycling and pedestrian infrastructure along a 1.5 mile segment of El Camino Real, between Selby Lane and Valparaiso Avenue, reallocating third car lanes or on-street parking for new bicycle and pedestrian facilities.

The council will also vote on whether to submit a grant application to the San Mateo County Transportation Authority for project planning funds. It will cost $1.6 million to fund the project study and initial environmental review.

DeGolia said he was not necessarily in favor of changing the width of El Camino Real to two lanes because there are no shops or businesses within walking distance in Atherton and it could cause more congestion.

Miles Holland has shared anecdotes of feeling unsafe on the streets of Atherton with his toddler.

“A lot of families drive their kids to school because it’s not safe to walk to school,” she said, noting that road safety should be one of the main concerns. priorities of the city now that the construction of the new civic center is complete.

Villalva referred to the fact that many students of color at the school were arrested by police without justification. He asked what steps the council would take to reduce this type of racial profiling.

Widmer said racial profiling is wrong, as well as the abuse of people with mental illness.

“I’d like to hear from anyone who thinks they were arrested inappropriately,” he said. “It’s important that you report it.”

DeGolia said he hasn’t heard of the issue, but he doesn’t doubt it and would like to build more relationships with Menlo College students so they feel comfortable about it. address important issues like this.

Conlon suggested the town have a liaison who consults with the school on an ongoing basis.

Miles Holland stressed that the onus should not be on victims to report profiling and that police should be proactive in uncovering incidents like those described by Villalva.

Learn more about the election

Menlo College hosts a polling station for the November 8 election, also at the Russell Center. Eligible voters from anywhere in San Mateo County can drop off their absentee ballot at the voting center or use the voting machines.

Learn more about the candidates in the Almanac Voter’s Guide.

A video of the forum will be posted on YouTube.