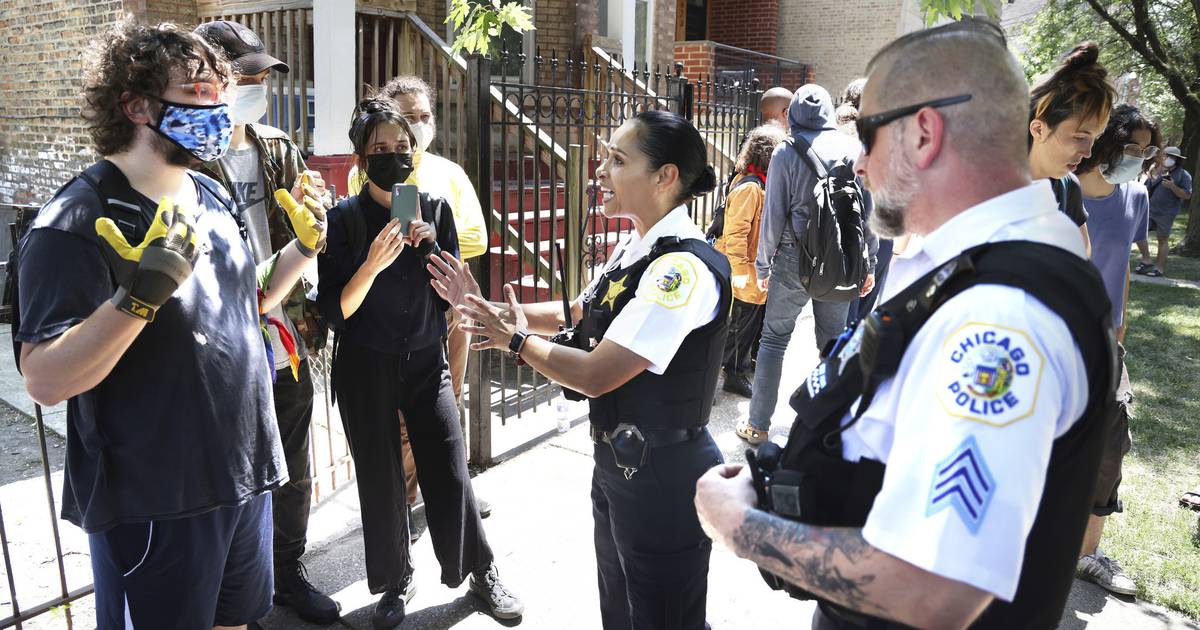 About 35 people gathered outside a four-bedroom house in Humboldt Park on Friday to enjoy the sun, music and food. They were stationed there to act as a barrier between the people who lived in the house and the people who were trying to get them out.

The home was one of four homes from which about 12 people were “illegally locked up” on July 26, said social researcher Emma Tamplin, 26, who helps people who called 1629 N. Washtenaw Ave. their house since the new year.

KD Williams, 39, and Wilson Mather-Glass, 25, are two such occupants. They said they moved on Jan. 1 after seeing a homeless encampment pop up in the neighborhood, while a slew of homes allegedly held by Chicago housing authorities remained vacant.

The Housing Authority owns the property located at 1629 N. Washtenaw Ave. since 1996, according to city records.

Williams said there was no eviction notice until July 26, when employees of the Hispanic Housing Development Corp. reportedly showed up at the house and removed some of their belongings and asked Williams, Mather-Glass and a third roommate, who was out of town on Friday, to remove the rest.

“They broke down our door, broke a bunch of our stuff, threatened us, used a lot of homophobic and transphobic slurs,” Williams said.

A representative from the Hispanic Housing Development Corporation said Friday that all requests for comment would be directed to the CHA.

The housing authority said in a statement: “CHA takes these issues seriously and is following all appropriate legal procedures to evict squatters from our property. We have viewed video of the July 26 encounter and are concerned about the how this situation was handled by our third party property manager and this incident is under investigation.

On Friday, Williams and Mather-Glass went inside the house with their belongings. Williams said occupying vacant homes is a way to oppose the “housing authority’s practice of keeping homes vacant for years”.

The house located at 1629 N. Washtenaw Ave. had multiple code violations in 2019, according to city building permit and inspection records, including failing to register the vacant building within 30 days of being vacated or within 30 days of taking possession of an existing vacant dwelling. building. The house was also cited for not maintaining the exterior walls and keeping the structure free of holes, breaks and any other condition that could allow rain or moisture to penetrate the walls.

Williams, who works as a teacher and also studies civil engineering, said it was clear the house was not built to last. “None of these vacant homes have been serviced because they are all falling apart,” Williams said. “So that’s their excuse for leaving them vacant.”

The housing authority said it maintains over 16,000 social housing and some of the housing is vacant for a number of reasons at any given time, including planned redevelopment, works such as painting and minor repairs and units undergoing larger capital improvement works. .

As homes become available for occupancy, they are offered to applicants on the housing authority’s public housing waiting lists, which are open and subject to HUD regulations, the authority said. housing.

“CHA provides safe and stable housing for 63,000 families across the city,” the statement said. “We work closely with other city agencies and nonprofits to provide housing opportunities to address homelessness, including recently issuing nearly 1,200 emergency housing vouchers.”

Tamplin said the four homes from which around 12 people were locked down last week had been “vacant for several years”.

The best stories from the editors of the Chicago Tribune, delivered to your inbox every afternoon.

On Friday, she was unsure if any of the other three homes had been reoccupied since July 26, two of which had previously been occupied by “more vulnerable homeless people” whom the Humboldt Park housing project “is trying to protect “. she says.

“The most important thing is to flip those vacant homes,” Tamplin said. “They must be made available to the people who need them. It’s absurd. People need housing, and if they want to keep talking about the need for affordable housing, they should do the bare minimum and spend what they get paid each year to take care of that housing and make it available immediately.

Mather-Glass, 25, is a special education classroom assistant, musician, activist and restaurant worker, and he said the community supports the group’s efforts.

There were no signs of trouble from the group, Mather-Glass said, and at the end of the day, most people are primarily concerned with the safety of their neighborhoods.

“We hear about it every day, but where is this violence coming from,” Mather-Glass said. “What are the things that push people into the streets and drive people to despair? Not having a house, that foundation being pulled out from under you, that’s square one. Once that happens, you slide down.