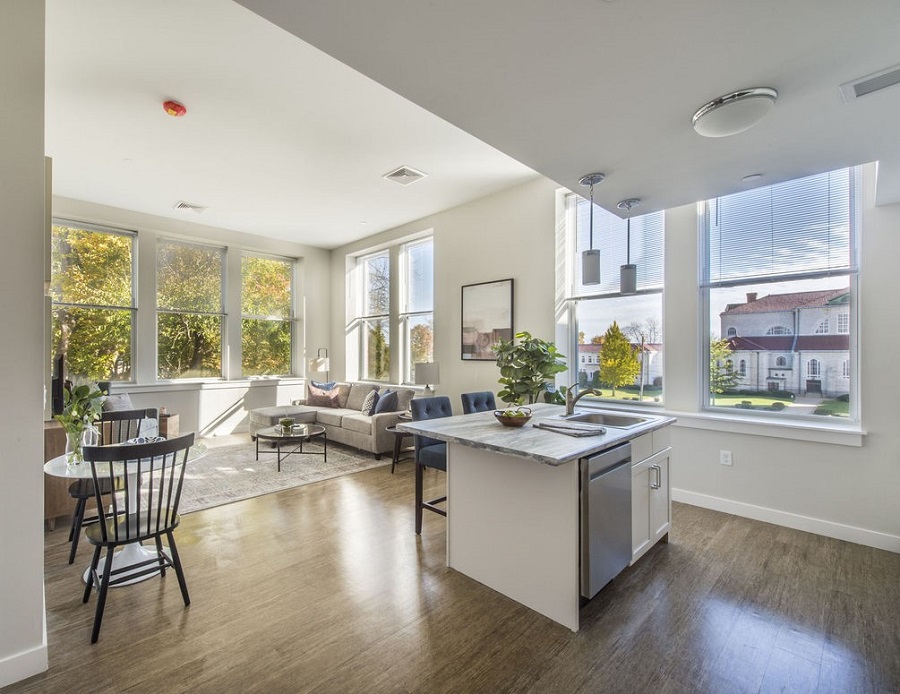 A 106-year-old school building has been adapted into affordable senior housing in Southbridge, Massachusetts.

Arch Communities and WinnCompanies have announced the completion of The Residences at Wells School. Of the property’s 62 apartments, 56 offer affordable housing at rents set at 60% of the area median income (AMI), including eight apartments reserved for residents at or below 30% of the AMI. Six apartments have been adapted for disabled and sensory impaired households.

“I have long been a champion of the Low Income Housing Tax Credit (LIHTC) and the Historic Tax Credit – two important tools that have been used here in Southbridge,” said Rep. Richard E. Neal, chairman of the House Committee on Ways. and Means. “The success of these incentives should serve as a model for developing fiscal tools designed to provide a direct benefit to communities that are often left behind. When we help communities provide housing, we help community members thrive.

The three-story, 90,000 square foot building served as a school for a century, but had been vacant for eight years before construction began in 2020. It was built in 1916 as Southbridge’s first public high school and was converted into a high school. in the 1960s.

The school is named after Mary E. Wells, wife of the co-founder of American Optical Co., an eyewear manufacturer that was once the area’s largest employer. Wells became the first woman elected to public office in Southbridge when voters chose her to serve on the town’s Board of Education in the 1890s.

Adaptive reuse techniques have preserved the historic features of the building, which was designed by Peabody & Stearns, one of the leading architectural firms in the eastern United States in the late 19th and early 20th centuries . It is one of nearly four dozen landmark adaptive reuse projects WinnDevelopment has completed in five states and the District of Columbia.

“As a developer, there’s nothing more satisfying than restoring a historic landmark and putting it back in service for a good cause,” said WinnDevelopment Executive Vice President Adam Stein. “Wherever we work, we encounter situations where older people cannot afford to stay in their community. This effort is a small step towards meeting a much larger need.

The project was designed to achieve Enterprise Green Communities. Keith Construction was the general contractor and The Architectural Team was the architect.

WinnDevelopment is working on another project in Southbridge. Construction is underway to turn part of a late 19th century mill in Southbridge Mills into 48 affordable housing units. Located in the 150-acre Southbridge Innovation Center, the $23 million project will convert an existing 70,000 square foot multi-storey factory building into 48 apartments, with 43 available for equal-income households. or less than 60% of the AMI and five available for households. earn less than 30% of the AMI.