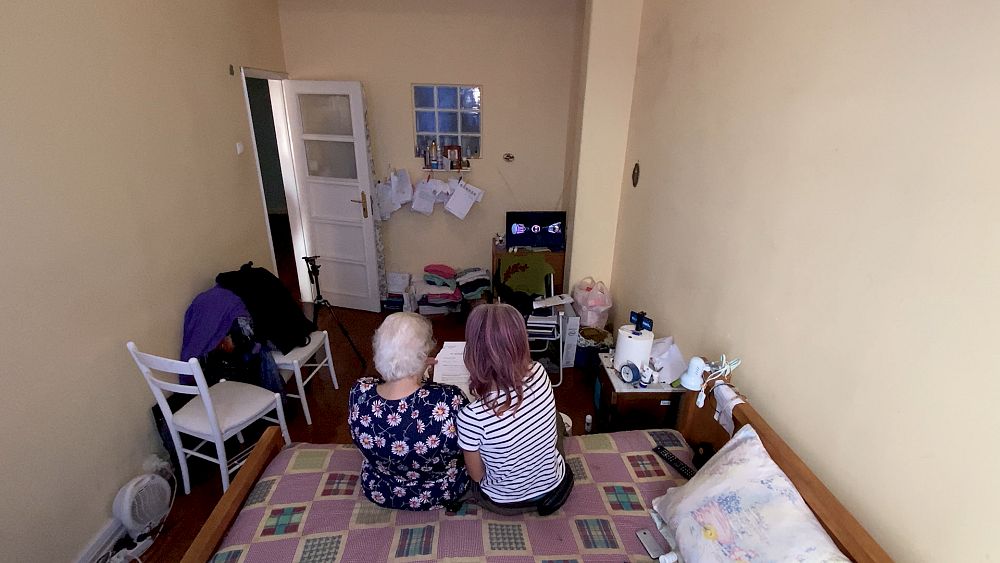 Can 86 years of someone’s life be stored in a 10m2 room? Nazaré Jorge can. For three years, the Portuguese retiree has lived in a tiny room made available by the municipality of Lisbon. Unable to pay the rent for the apartment she had shared for four decades with her aunt, she was evicted in 2019.

She was escorted out of the flat by the police and later given the room she now calls home. There are no wardrobes, so clothes, medicine, photos and all her things are stored in plastic bags strewn around the bed. She took her 84th birthday to the Department of Infrastructure and Housing to demand adequate housing.

On a very hot June morning, I spent almost three hours listening to her story and filming the sordid room in which she now lives.

A few weeks before, I had been put on the story which can be summed up as “the housing crisis in Lisbon”. The real estate market in Portugal, but especially in the capital, is now what analysts call one of the “most dynamic” in Europe. But this comes at a heavy human cost.

As a result, property prices and rents have skyrocketed. A booming economy that pushes prices up – and some people like Nazaré are leaving.

Our fixer, Miguel Jorge Dias, came into contact with Nazaré through the NGO Stop Despejos (Stop Evictions) who, together with another NGO called Habita!, provided us with the perspectives of those who experience the more this shortage of social housing.

To my amazement, even the center that houses Habita! is threatened with eviction because the landlord has refused to renew the rental contract. The reason is unclear but they suspect an ulterior motive. The NGO attributes the general housing crisis in Lisbon to runaway speculation, unregulated rents and political inaction.

In search of answers, I contacted the authorities. I spent a lot of time asking questions of the deputy mayor of Lisbon for housing. Lisbon City Hall is considered the largest real estate owner in Portugal. it has 25,000 social housing units. Most, but not all, are currently allocated. It is for this reason that the municipality is on the front line of the crisis and faces strong criticism for not doing enough to remedy the situation.

Filipa Roseta, the Deputy Mayor for Housing, patiently answered all of my questions, vehemently refuting some of the allegations the local authority has been accused of. She told me about their ongoing work to alleviate the hardships many residents face, including, in some cases, lower rents. When the interview was over, she told me about a grand opening of a new public housing estate that she was planning to attend in the afternoon, so I joined her and found that the Mayor of Lisbon and even the Minister of Infrastructure and Housing were also there.

Luckily, all the filming took place during the Festas de Lisboa, a special time for the city. It was also a powerful and colorful reminder of Lisbon’s unique traditions and culture and how this heritage is under threat as more and more residents are forced out of the city due to soaring rents.