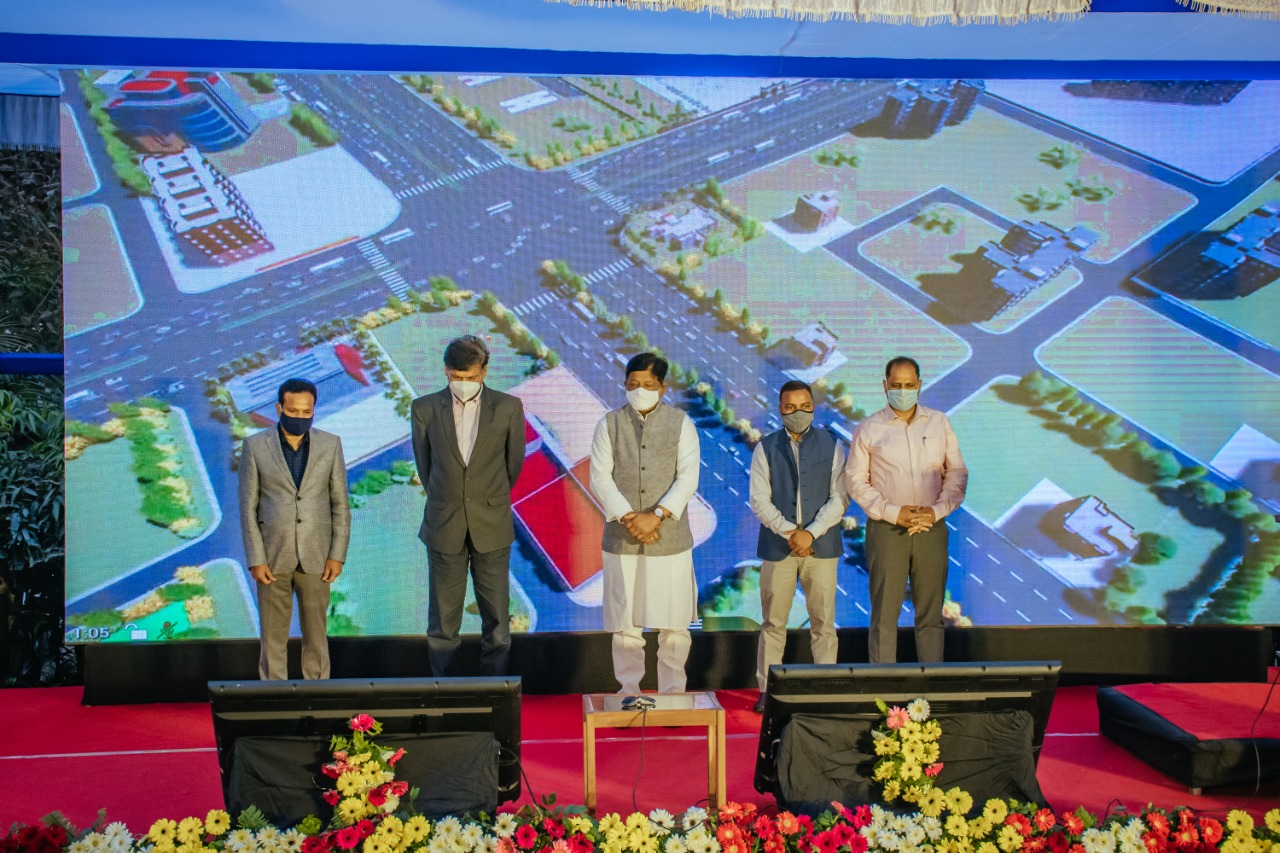 Bhubaneshwar: With the aim of managing urban expansion and improving socio-economic activities through a structured and modern process by ensuring that land-use planning is integrated with the provision of services in the expanding peripheries of the capital , the Bhubaneswar Development Authority (BDA), for the first time in Odisha, is set to implement the state’s first-ever town planning scheme (TPS), through land pooling – an alternative viable to land acquisition – to bring well-planned and sustainable urban development in the Bhubaneswar development plan area.

With this program, BDA will now adopt the method of land pooling instead of traditional land acquisition for infrastructure development and urban growth in Bhubaneswar and its outskirts. This method is fairer to the land owner who only gives away part of his land and whatever he keeps is worth much more than his original property due to many facilities like wider access road, sewers, water, markets, schools, college made available its proximity. The value of the land one retains increases far beyond that of his original property and he also has access to significantly better infrastructure.

Speaking on the occasion, Naveen Patnaik, Chief Minister, said, “I am pleased that the Bhubaneswar Development Authority, in partnership with landowners, has launched Odisha’s first-ever urban plan. This is a fair, transparent and convenient way to expand cities in a planned way. This will herald a new era of planned development in the state. I hope we will implement this program within a limited timeframe and create a model for the rest of our cities to emulate. Cities are the growth engines of our economy. We need to plan our cities sustainably and allow for organic growth while providing safety nets for the vulnerable. Community partnership and citizen participation are at the heart of the city’s development. My Government gives high priority to these models of partnership with the active participation of citizens. We should become a model in urban development.

Addressing the occasion, the minister said, “With the implementation of the urban plans, the people of Bhubaneswar can get a planned city and the landowners can get their due. Therefore, we must all take responsibility and contribute to making Bhubaneswar a well-planned and world-class city.

In the first phase, 358 issues of Record of Rights (RoR) will be distributed to landowners in Sahajpur village.

This program will bring historic change by curbing the unplanned growth of the city and will mark the beginning of planned development beneficial to landowners as well as city managers.

The program will greatly contribute to strengthening housing, infrastructure and accessibility for beneficiaries, including landowners, in addition to accelerating the dynamics of the urban development sector in the capital and its outskirts. In addition, the TP program offers a great opportunity in terms of increasing economic activities and the standard of living of citizens.

BDA contacted landowners on an individual basis with the help of Khordha district administration to sensitize them about the project. All plot owners will benefit from physical infrastructure such as roads, sewers, water supply and sewage, while electricity supply and housing for the economically weaker sections is an important inclusion in the program .

“Although Bhubaeswar is a planned city, it has lost its planning characteristics and importance due to unplanned and haphazard developments in and around the city. Thus, by implementing the urban plan and the local plan, the city will benefit from more planned development and avoid unplanned development characterized by mixed land use. We can secure urban land for public services and ensure a more equitable distribution to make Bhubaneswar a well-planned, modern and more equal city. We will complete all urban planning projects within the stipulated time,” said Prem Chandra Chaudhary, Deputy Chairman of Bhubaneswar Development Authority and Commissioner of Bhubaneswar Municipal Corporation.

Land pooling has been used internationally for urban development in Europe, Australia, Tokyo, South Korea, Seoul. In India, states such as Maharashtra, Gujarat, Tamil Nadu, Punjab, Andhra Pradesh and Kerala have used this instrument as a viable alternative to land acquisition.

The concept is to combine small plots of rural land into one large plot, provide it with infrastructure and return approximately 60% of the redeveloped land to the owners after the development is completed and appropriate the costs of the infrastructure and spaces. public. Of the 40% that remains with the authority, a substantial part is reserved for the establishment of infrastructure such as roads, hospitals, schools, parks, electricity, water, sewers , etc

The urban plan is a win-win for the landowners and the authority. Since contiguous plots are required by government authority, the landowner usually gets a percentage of his property in rectangular form near his original property. One can also obtain an additional floor space index (FSI), thanks to which the value of the returned land will be a multiple of the value of its original holding, even if the size of the plot has decreased.

In accordance with the Comprehensive Development Plan -2030, there is a provision of a ring road of 64.90 km in the BDPA area. It has been proposed to take charge of 45 Urbanism Plans in 58 Income Villages over 200 meters on either side of the ring road. BDA has already prepared the Action Plan to implement the First Urban Plan (TP Scheme No.- 01/2015) covering Mouzas parts of Sahajpur, Naragoda, Sijuput and Paikarapur over an area of ​​746.70 acres – a first of its kind project in the entire state.

Under the First Master Plan (TP Scheme No.- 01/2015), BDA will take over 40% of the area from the landowners under the master plan covering 746.70 acres of four Mouzas such as Sahajpur , Naragoda, Sijupur and Paikarapur. Instead, the development authority gave no compensation but will provide infrastructure development on the remaining 60%.

Once implemented, the city will be able to secure land for public purposes such as low-income housing, open spaces, roads, utilities and social amenities, avoiding much of the haphazard and unserved expansion taking place in and around Bhubaneswar despite its being one of the planned cities of the country.

After obtaining the state government’s approval on the final proposal, the Department of Revenue and Disaster Management initiated the final plot correction record in favor of the landowners. Correction of records for other villages i.e. Naragoda, Sijuput and Paikarapur under the preliminary scheme of TP No. 1 is ongoing and will be completed soon. After work to update the file, possession will be returned to the landowners. Subsequently, infrastructure development works such as roads, water supply, sewerage, storm water drainage and street lighting will be carried out under the project by the government.

BDA formed a dedicated urban planning unit and organized full public participation at various stages with landowners and other stakeholders to prepare the urban plan. The Authority conducted public engagement as follows:

– : Conducted outreach programs in the village to inform and educate people about the program.

– : Landowners are informed about the meeting and briefings have been organized to obtain valuable information for the successful implementation of the program.

-: Landowner issues were addressed based on objections/suggestions received from landowners.

– : An exposure visit to Ahmedabad was carried out for land owners to give an idea of ​​the best practices carried out under the TP programme.

What is an urban plan?

The basic concept of the Town Planning Scheme (TPS) is to consolidate all land under different properties and redistribute it in a properly reconstituted form after deduction of land needed for open spaces, social infrastructure, services, housing for the economically weaker part, and road network. The process allows the local authority to develop land without acquiring it entirely and gives positive control over the design and dynamics of the pace of urban growth.

Advantages of the urban plan:

-: cooperative model for the benefit of the community, the city and the State

-: No land acquisition is required

-: Benefits to land owners as there is added value to the land and have the flexibility to undertake activities for construction/commercial purposes

– : Role of the Development Authority as a facilitator in the provision of infrastructure services such as roads, water supply, sewage, storm water drainage, street lighting, etc.

Prem Chandra Chaudhary, Vice President of the BDA delivered a welcome speech and Harish Chandra Nayak, Secretary of the BDA gave a vote of thanks.