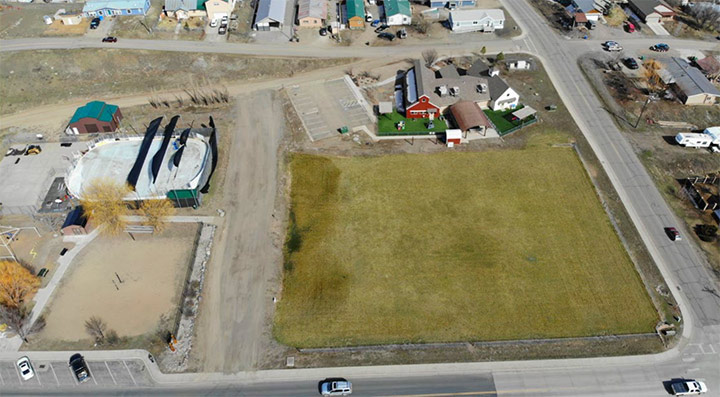 The first item to be discussed, at the Tuesday, April 12, planning committee meeting, was the proposal to use approximately one-third of South Pagosa Park as the site for a 28-unit apartment building… which could, or no, look something like the photo above.

Whatever the building looks like…it might or might not be located on the northeast corner of South Pagosa Park.

Really, that was the only agenda item that generated a lot of debate on Tuesday.

The first iteration of this proposed apartment building showed that it replaced an existing grassy playground – shown in the following photo at the bottom right, in the southwest corner of the park – which is regularly used by children and families in the neighborhood, including families involved in the seeds of the Learning Early Education Center, pictured top right…

This first iteration, Option A, proved very unpopular with the community during neighborhood meetings between City staff and neighborhood residents. As a few people who testified at Tuesday’s Planning Commission meeting pointed out, the city government has, over the past few years, made a few attempts to convert park properties to “commercial” uses. “, and these two attempts were rejected by citizens. referendums.

What is the probability that this attempt will also be defeated – if the City tried to replace a grassy playground with housing for the workforce? Good question.

So the Planning Commission was presented with Option B, which showed the apartment building replacing the existing pickleball courts and ice rink at the northeast corner of the park – essentially, a cracked concrete slab that had served , skate park years ago, and before that, as basketball courts…although maybe it was originally built to be tennis courts?

The proposed apartments, as presented in Option B, would span the existing 7th/8th Street driveway, eliminating what has been a popular transportation route for the surrounding neighborhood. 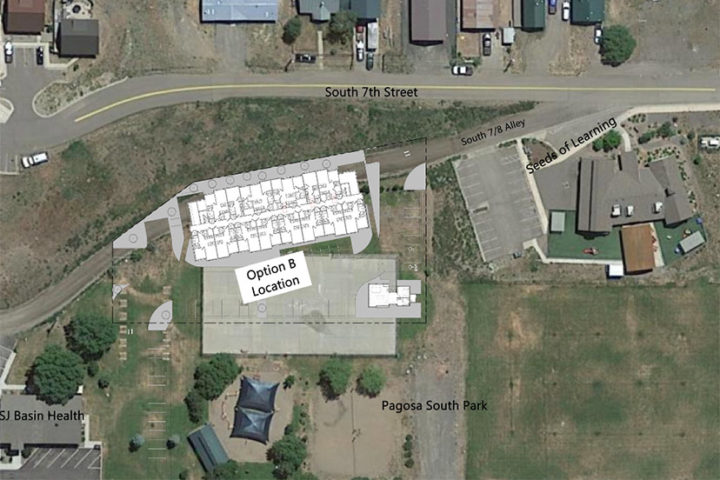 The dynamic economy of Pagosa Springs and the rules and regulations promulgated by our local governments have discouraged the construction of one and two bedroom apartments. Meanwhile, the construction industry has focused, over the past 20 years, on retirement homes and “second homes” – single-family, stick-built homes, the price of which is usually beyond financial reach. of our low-paid workforce.

Here we listen to community resident Mark Bergon, one of the local activists who helped launch South Pagosa Park 25 years ago, speaking to the Commission.

“First, I want to commend you all for working to improve our housing situation by making it more affordable for working people. This is a huge problem, not only local, but regional…

“I come to you to request that you exempt South Pagosa Park as a location for the construction of such a necessary facility. I have an innate affection for parks and park-like environments…I have always valued the cities according to their park system…

“In the 1990s I had the privilege of being part of a small group that hoped to build a park on vacant land in South Pagosa. Eventually many more people got involved and the dream came true.

“It’s unfortunate that parks and public lands, whether local or national, are still seen as fair game for development…”

Some other people who spoke at the meeting, including a few planning commissioners, agreed with Mr. Bergon’s basic premise that parks – being “vacant land” – are easy play as development sites and therefore require diligent protection.

But the Commission as a whole preferred to use the northeast corner of the park as the location for 28 “workforce housing” units, and in the end the Commission voted 4 to 1 to order staff to work with Servitas, and bring forward an improved project design that would preserve 7th/8th Aisle.

The question that has continued to plague me, personally, is not whether the 64 apartments offered by Servitas will eventually be built, or where, exactly, they would be located, but rather… how much will they cost to rent?

I think back to 1993 – a year that remains etched in my memory, as the year Clarissa and I moved to Pagosa with our three children, to explore life in a hip Colorado mountain town. For some reason, the weekly Pagosa Springs SUN offered very few rentals that summer, and we ended up in a tiny one-bedroom house just down the street from the Spa Motel (now the Healing Waters Resort), paying what we thought was a outrageous rent:

Outrageous, even though the rent included most utilities.

Surely this rustic little house – I guess it was about 580 square feet? – included a back yard directly on the San Juan River, so I could walk out the back door and catch a trout for dinner. The rent seemed fair terribly high, at 75 cents per square foot.

But we didn’t really have a choice in 1993…or so it seemed. The rental market was really tight.

I checked an inflation calculator yesterday, to see how much that same 580 square foot house could rent for today, if that same exorbitant rent had kept pace with inflation. (And if the house hadn’t been demolished to make way for condominiums.)

With inflation, he would rent for $895 per month.

Below is a slide shared by City Manager Andrea Phillips at the start of the Planning Commission meeting. (For some reason, we can see a video image of City Planning Director James Dickhoff in the corner, as if considering the dollar amounts.)

Looking at the rents that will apply to the three Servitas workforce housing projects, if they are built as planned… 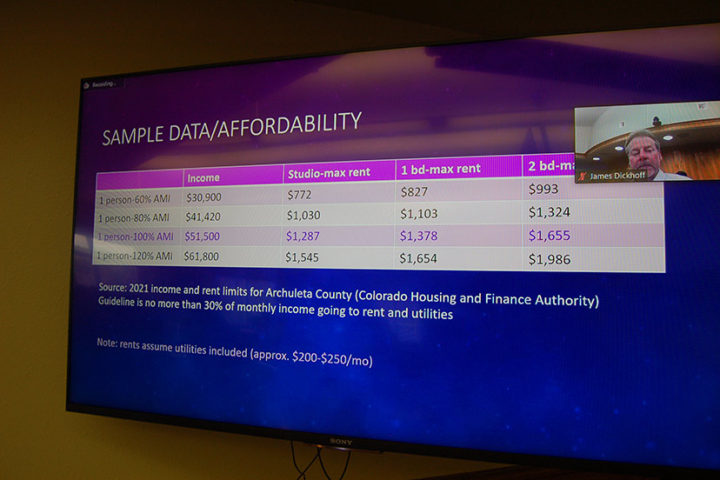 As I understand the proposed project, Servitas is a for-profit partnership, so they want to make sure that their three “P3” projects here at Pagosa generate a profit.

The cozy, small one-bedroom apartments they offer will reportedly be around 580 square feet and will rent for “80% to 120% AMI” including some utilities.