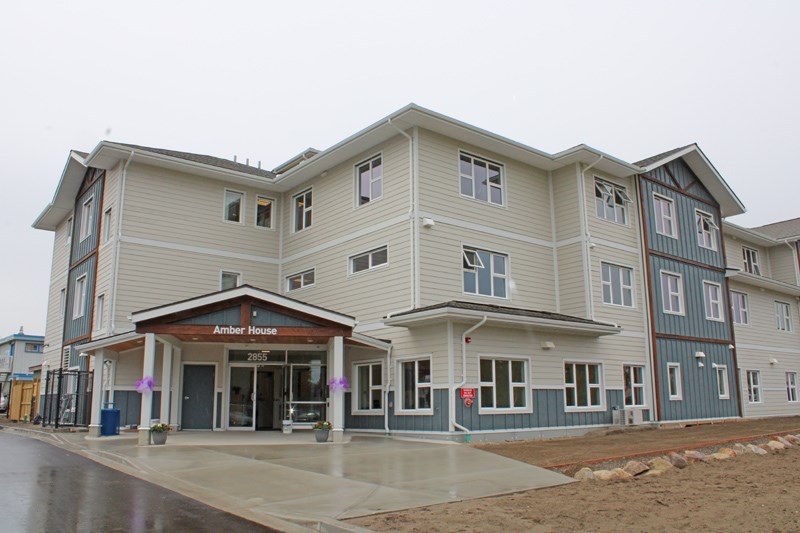 Women and children leaving violence will now have access to 55 new safe and affordable homes, including support services, with the opening of My Sister’s Place in Prince George.

Transitional and second-stage housing is in one building, while townhouses are spread across the other three buildings.

My Sister’s Place opened today with a special ribbon-cutting ceremony, tour and performance by UHNBC drummers.

“I want to thank and acknowledge everyone for having the faith to see the vision that we felt and saw. Women here in the North and in this community deserve to have this full continuum of housing when they need it most. And that’s what we’ll provide care from crisis to long term,” said Kathi Heim, former chief executive of the Prince George Elizabeth Fry Society, who oversaw the project.

Transitional and Second Stage Housing both provide short-term, low-barrier accommodation with on-site supports for women coming out of violence, including transgender women and non-binary and two-spirit people, and their children. dependent.

Halfway house guests normally stay for 30 days, while second-stage housing residents typically live in the units for six to 18 months before moving to more permanent housing.

The Prince George and District Elizabeth Fry Society will operate My Sister’s Place, providing on-site support services, such as crisis intervention and safety planning, to residents and other women and children leaving violence in the Prince George area.

The development will provide women and their children with the opportunity to transition smoothly from beds in transitional homes to second-stage units and affordable townhouses.

“It’s an exciting time. It’s an opportunity for us to really recognize the long-term work that’s been going on in the city for years,” said Mayor Lyn Hall.

“That’s really what the city is about, it’s supportive housing and it really provides various options for women to stabilize and for women and their children to have security and stability.”

Rent for second-stage housing and townhouses will be calculated at 30 per cent of residents’ income or the provincial housing rate for those receiving income assistance or disability assistance.

Transition houses provide an immediate safe space for women to begin rebuilding their lives, with no demand for rent from guests.

Residents of My Sister’s Place are expected to move into the new spaces as early as next week.

The development is a partnership between the province through BC Housing, the federal government through Canada Mortgage and Housing Corporation (CMHC), the City of Prince George and the Prince George and District Elizabeth Fry Society.

Since 2017, the province has funded nearly 34,000 affordable housing units completed or underway for British Columbians, including more than 350 units in Prince George.