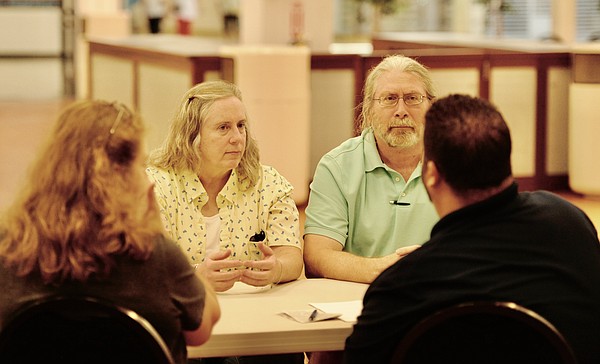 Attendance was lower for the third of three community housing talks, but that just gave organizers more opportunity to answer questions from the community leaders involved.

Members of the capital’s housing task force sat down with listeners to answer their questions, which have only grown since Tuesday, when several city council members objected to support for three housing communities multifamily homes for the workforce planned for Jefferson City. Each of the developments eventually received support from the city.

Affordable housing is scarce, Vogeler said. And because of that, some homeowners don’t feel they have to maintain their properties.

In a market where there is adequate housing, a tenant can complain and not have to worry so much about losing their apartment because there are other places to go, he said.

Vogeler said he had a client who was placed in an apartment, but had a problem she was afraid to report.

“I had a lady – she went without hot water for over a year,” Vogeler said. “She called her landlord, who said he was going to look at it. Finally, she called the city, who said it needed to be fixed. (The landlord) got mad at her and didn’t not renewed his lease.

She ended up at the shelter.

Assistance in finding housing is one of the resources provided by the Center of Hope. The center has good relations with a number of owners. Vogeler said he recently had a client the center placed in an apartment tell him about a problem with the apartment. Vogeler said he called the owner, who had it fixed immediately.

That influence comes from having good relationships with – and connecting clients with – landlords who want to maintain those good relationships and continue to get good tenants. The shelter now has nine clients who qualified for Section 8 housing and received vouchers, but have nowhere to go.

Vogeler said he received a call on Friday from an owner who said he had two spots open. Vogeler agreed to put him in touch with two of his clients. If the clients receive the apartments, there will be people ready to take their places in the shelter.

Mollenkamp said having the well-maintained, private multi-family developments that preceded the city on Tuesday would put pressure on current owners to “up their game.” This would force them to better maintain their sites, otherwise they would lose the tenants who pay well.

When asked why councilors were opposed to the sites, Mollenkamp told listeners that councilors had argued that more single-family homes were needed.

It is unfortunate that former mayor Tom Rackers provided incorrect information during his testimony at Tuesday’s meeting, Mollenkamp said.

He said that in 2019, the year a May tornado hit Jefferson City, the shelter provided more than 28,000 meals. It was the busiest year he can remember.

“There are a lot of kids this year. A lot of kids. More kids than I’ve ever seen,” Vogeler said. “It’s frightening.”

Last year, for the entire year, the shelter served approximately 23,000 meals. It is already at around 24,000 this year with more than a quarter of the year remaining.

Kevin Stock and Joy Ledbetter attended the event together on Saturday morning.

Worker stays in shelter due to rent shortage