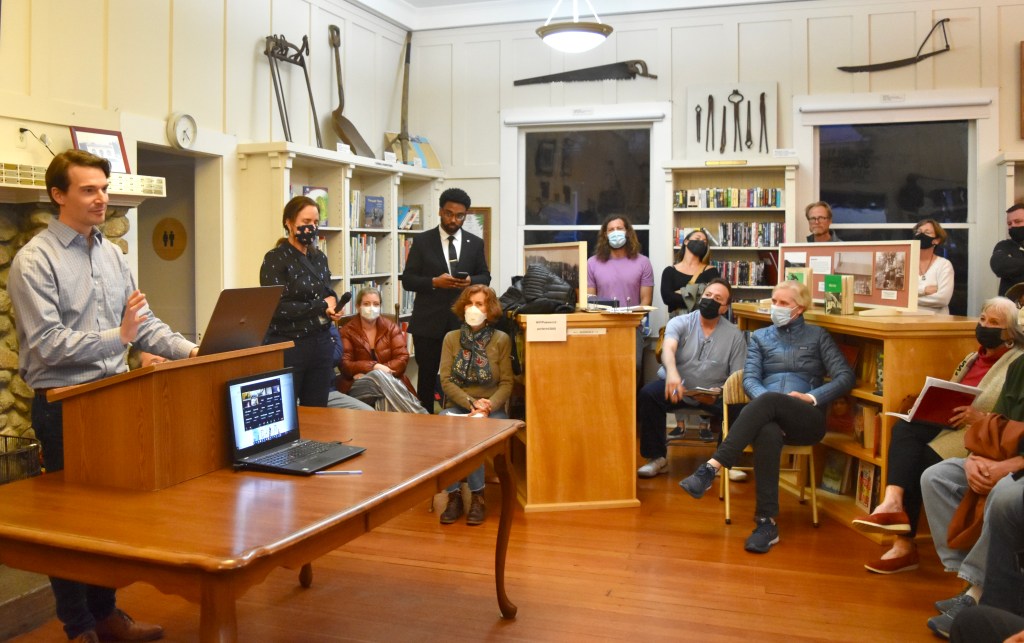 Some 60 residents crammed into the tight quarters of the Porter Memorial Library, in addition to others who tuned into the meeting virtually via Zoom, for the town hall meeting of Santa Cruz County Supervisor of the 1st District, Manu Koenig.

When Koenig asked the audience in attendance to discuss the proposed Park Avenue development, almost every hand in the room went up.

Connie Gardner said she lived opposite the proposed project and felt she had to ‘read between the lines’ to understand the impacts of the development and thought it was all ‘stinking’.

“This program that you applied for is supposed to be for existing structures like the ones they use in Watsonville: hotels, motels that already have bathrooms, they already have water,” Gardner said. “I understand why this is happening, everything is falling into place. The state passes (laws) that say you don’t need a CEQA (California Environmental Quality Act) exam. It all fits together beautifully, but it’s not right.

Developers of the proposed project aim to build a 36-unit modular apartment complex on a vacant wooded lot near the Park Avenue on-ramp to Highway 1 and only half a dozen blocks away. from the Aptos campus of Cabrillo College, at 2838 Park Ave. They will use a $13.5 million grant from Project Homekey — one of four such funding applications underway countywide — to offset the estimated total of $26 million needed to convert the commercial property into a permanent housing with attached support services. According to a county report, FPI Property Management would manage the property and Abode would provide tenant support services.

“It will be permanent accommodation,” Koenig said. “So, in fact, this is not housing for the homeless, because as soon as they are lucky enough to receive housing in this building, they will no longer be homeless. There is no time limit for how long they can stay there. These will not be people who change every six months, every year. »

According to a California Department of Housing and Community Development website, Project home key continues a statewide effort to maintain and rapidly expand housing for those who are homeless or at risk of becoming homeless. The program aims to develop a wide range of housing types, including but not limited to hotels, motels, hostels, single family homes and multi-family apartments, adult residences and manufactured housing and to convert commercial properties and other existing buildings into permanent or temporary accommodation. lodging. Designed to be a rapid response program, grant recipients have only eight months from the date of award to spend capital funding.

The community shares its fears, its support

Other community concerns raised Thursday included meeting general fire, safety, accessibility and other building code requirements; ample parking supply for residents and fire safety in adjacent eucalyptus groves. Other speakers raised concerns that resident support services could be offered to non-residents and cause a “magnet effect” for the homeless, with many assuming that new tenants would result in their neighborhood an increase in crime, fire hazards, outdoor illegal drug use, a related decrease in the neighborhood. land values ​​and a tendency to exceed the capacity limits of living quarters.

“I do my part in the community and I love my community. I am concerned about change,” said AJ’s Market owner AJ Javed. “I have nothing against the homeless, helping the homeless. But I’m afraid this is not the right place for it.

Participants Nancy Yellin and Payson McNett were the only voices offering their support for the project amidst the greatest opposition. Yellin pointed to the strongly opposed schedule for former adoptive youth living in 2020 and 2021 in trailers at Seventh-day Adventist campgrounds on Soquel-San Jose Road that she said ultimately posed little trouble to neighbors. McNett said there are many homeless students at Cabrillo College who could benefit greatly from a housing program such as the one being discussed.

Koenig said he believes “the whole community is partly traumatized by the impact of homelessness, in general.” Seeing the impact of homelessness on businesses in downtown Santa Cruz, Koeing said he would never want to allow the same thing to happen in other parts of the county. Koenig cited his recent efforts to help coordinate illegal removals from homeless encampments in areas such as the Highway 1 and 41st Avenue on-ramp and Brommer Street Park.

“What I would say to your kids is that these are people who didn’t have moms and dads, lived in a variety of different homes and are now trying to create a place where they can put their feet under. them and go to school at Cabrillo College,” Koenig said in response to a question from the audience. “These are veterans who fought for our country in wars…and these are families with children who will be able to send their children in a kindergarten like the one opposite.”

Koenig said apartment applicants would be screened before moving in, barring registered sex offenders and other violent or drug offenders.

“It feels like there’s been a breach of trust with our leadership representation,” said speaker Alexia Martinez, co-organizer of the recently created Facebook page, Soquel Aptos Community Response Homekey Group. “I think a lot of us feel a lack of communication because it snuck up so quickly, because of clearance delays and all that. So let’s re-establish a partnership. Site assessment, environmental compliance, all safety. You can stop that and restore that trust.

On the lookout for next steps

Martinez, speaking to the Sentinel on Friday, said members of the group will then focus their efforts on ensuring the California Department of Fish and Wildlife keeps tabs on the proposed development plan.

Although council approval of the joint grant application is not an automatic approval for construction of the housing project, state laws limit the power of local jurisdictions to slow project approvals, based on of this year’s Housing Development Bill. Assembly Bill 140 and the 2017 State Bill, AB 2162according to a county report.

The state must approve or deny Homekey Project requests within 45 days of the request. Santa Cruz County jointly submitted applications for three proposed housing projects in the county after the Board of Supervisors gave its assent at its Jan. 25 meeting. Two weeks earlier, a fourth housing project application had initially received the green light. If the state approves the grant application, Koenig said he would hold an additional community meeting and invite the site developer and other county officials to answer specific questions from the community.

“We should actually have an answer any day now,” Koenig said. “The only thing that gives me confidence in this project is that it is reserved for very specific populations. So 17 vets, 14 former young adoptees, and four families — families with children under 18. And there will be a manager on site.

Residents would be matched with various available housing vouchers that would match the amount of rent they would pay – up to 30% – to their income. Those without jobs, Koenig said, would work with case managers to develop life skills to secure work and sources of income. Koenig said he has concerns within the community about what will happen if funding for associated housing support services ends in the future.

“We really don’t expect that to happen,” Koenig said. “The project budget includes a service reserve to fund support services, to fund this on-site manager. And really, a lot of these voucher programs come from either the state or the federal government and you don’t expect them to disappear overnight.