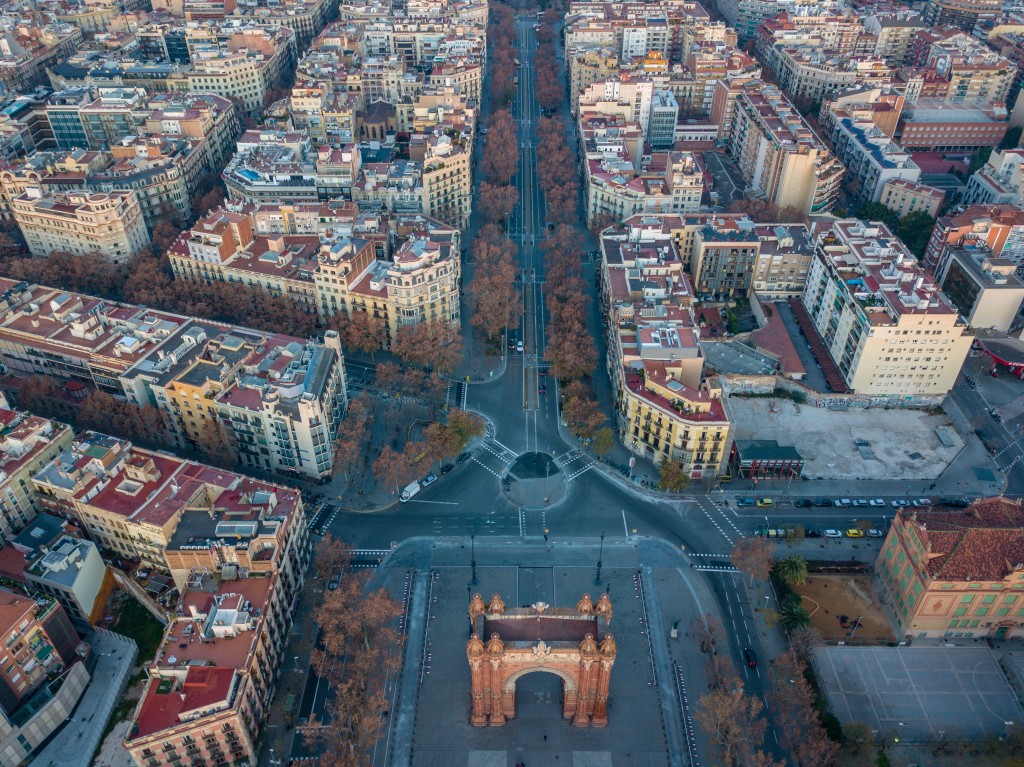 It’s a normal Monday morning when residents of Barcelona’s Poblenou neighborhood leave their homes and start a new working week. The streets previously occupied by vehicles are empty and it’s a short walk to the nearest bus stop. This is “superblock” city living, an experiment in giving the streets back to the communities.

The originator of the superblock idea was Salvador Rueda, director of the Barcelona Urban Ecology Agency. It is a bold urban project that aims to reclaim city streets from motor vehicles and return them to residents.

Simply put, a superblock consists of nine residential blocks. Inside, traffic is reserved for local residents and is one-way with a speed limit of 10 km/h. Residents can still access their garages, but no through traffic within the blocks is permitted.

As traffic decreases dramatically in the superblocks, the newly liberated public space becomes a place for various cultural and community activities, as well as children’s playgrounds, urban farms and open theaters – residents’ creativity becomes the only limit on the roads.

The most notable advantage of a superblock in the city is the public space it creates: “The main goal is to create cities,” says Rueda. “A city starts to be a city when you have public spaces.”

Inside the superblocks, motor vehicle noise is less and the air is cooler. Most importantly, neighbors have places to mingle and get to know each other better.

“When we arrived here, it was like a ghost town, there was no life. So (after the superblocks), you meet your neighbors, you can eat outside, the kids are playing in the street. We love it,” says Silvia Casorrán, environmental scientist and Poblenou resident. “People are starting to think about how to defend it in the long term.”

Besides these benefits, the project also reduces road accident rates and increases mobility as it ensures straighter walking paths and reduces waiting times at traffic lights. The average time saving for a 3×3 structure can reach 15%.

A success for superblocks

Various factors contribute to the success of superblocks. For starters, Barcelona’s iconic Eixample district has a grid-like street design and is the perfect place to experience superblocks. The city’s revamped public transport options and incentives for cycling also play a vital role.

When more superblocks are established around the city, more bus lines are bound to be changed. The future network runs fewer lines than the radial network it replaces, but the frequency increases, guaranteeing a reliable 2-minute wait at each stop.

The new orthogonal bus route pattern is not only easier to understand, but frequent breaks every three blocks also make it easier to get around and ensure that one transfer is enough for everyone.

In addition, granting wider access to public bicycle and transport services is essential, especially intercity options or those that run in steep areas. These changes make medium to long distance travel possible, and even more sustainable.

What to do on the street

Arguments hampered the Poblenou experiment, however. Some residents living on the outskirts of superblocks are confused by the altered street signs and frustrated by the disappearance of familiar bus routes.

The transition period between more citizens willing to ditch their motor vehicles and gentrification, or rising real estate prices in superblocks, also requires the insight of local planners.

As a general rule, the people of Poblenou did not ask for public space until they had it. At first they were hesitant to use these spaces, but that changed when picnic tables were placed in the areas. That’s when people sat down and talked, when they really started to take ownership of their neighborhood.

Stopping cars or changing street signs is relatively easy to do, but establishing more permanent establishments like art venues and amenities, or encouraging people to participate in street activities is a slow process.

“It’s about spontaneity and self-organization, empathy and relationships between people,” Rueda explains. “You can’t plan this, but you have to create the space.”