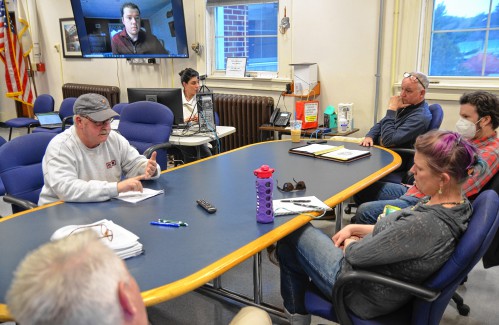 MONTAGUE — Landlord Chris Couture clashed with the Planning Board over the potential implementation of mixed-use housing on First Street during the council’s “Smart Growth Overlay District” public hearing on Tuesday.

Couture said he owns a parcel at “the grassy end of First Street” in one of two areas being considered for redevelopment as Smart Growth Overlay Neighborhoods, defined by Massachusetts general law as ” mixed-use or dense residential smart growth zoning neighborhoods including…affordable housing…in areas of concentrated development such as existing downtowns and other highly suitable locations.While Couture said that the other proposed neighborhood—located at 11 and 15 Power Street parcels where Railroad Salvage was located—might be suitable for housing, he strongly disputed the idea that First Street should be used for anything other than commercial space.

“My biggest concern is that general business in downtown Turners (Falls) is evaporating and I don’t want to see that,” Couture said.

Early in the discussion, the planning board and planner Walter Ramsey clarified that the city is not removing existing zoning regulations or imposing development on Couture’s property. Rather, the designation would simply grant additional flexibility for development that a private landowner may or may not choose to take advantage of.

“It doesn’t bother a private landowner because the underlying zoning is still in effect,” said city planner Walter Ramsey, noting that there are entire cities designated as smart growth overlay districts.

“Your package is always free to do with it what you want,” said Planning Board Chairman Ronald Sicard.

However, Couture remained firm in his opposition, insisting that he was “being despised” by the plan. Initially, Couture says, he “had a plan for the whole gang” for the commercial development of First Street before personal and world circumstances got in the way.

“I intend to expand it at some point,” Couture said.

He also articulated Montague’s hopes of implementing housing as a ‘precursor’ to the city’s ‘big plan’ to eventually acquire his property, citing past instances in which he was ‘ghosted’ and ‘completely ostracized’ » in agreements with the city. That, he said, included a period when the city denied him curb cuts after sidewalks were installed next to his property. Sicard, arguing that these grievances were too irrelevant, opted to “continue this further behind the scenes”.

Other residents present at the meeting on Tuesday endorsed the idea of ​​installing mixed housing after the conclusion of the discussion with Couture. Laura Heisig, a resident of the Patch neighborhood where the Power Street plots are located, said the property “really lends itself to affordable housing”.

“I like the idea of ​​developing more affordable housing,” said resident Jackie Stein. “I like that the city has more control over the character of this.”

The Smart Growth Overlay District Implementation Proposal will be presented prior to the May 7 Annual Municipal Meeting.