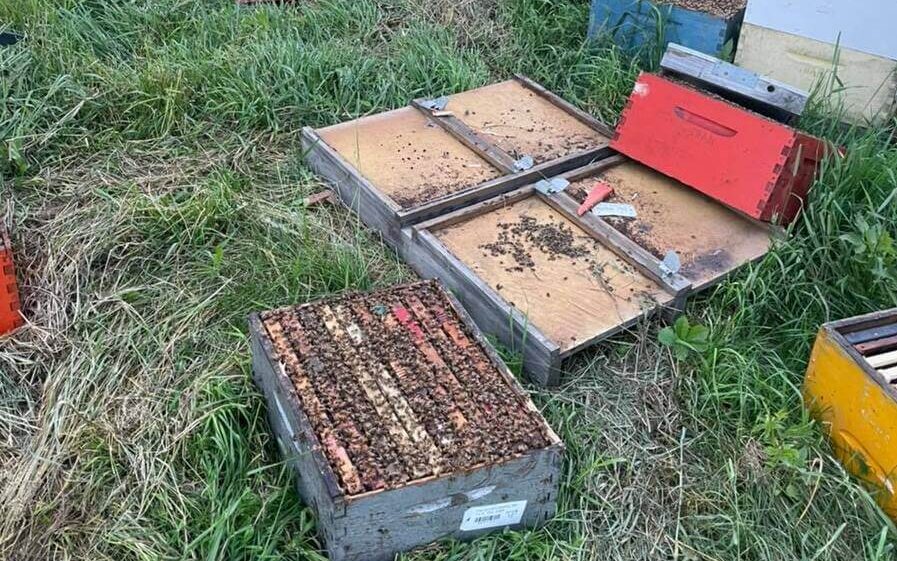 Vandals caused $5,000 in damage over the weekend after destroying a number of beehives at Swan’s Honey in Albion.

In photos posted on social media, tire tracks are clearly visible where a vehicle passed through the hives. The grassy area is dotted with bits of beehives, some with honey bees clinging to them.

The damage was discovered when workers came out to inspect the hives which had been placed on wooden pallets, according to a Swan’s spokesperson. Each pallet contained four hives and each hive housed between 50,000 and 60,000 bees.

“You can do the math,” the spokesperson said. “That’s a lot of bees.”

Given the presence of tire tracks and the absence of scratches on the hives, the damage was caused by a person and not a bear in search of honey.

“It was vandalism,” the company said in a Facebook post. “There were no signs of bear damage such as scratches, bite marks or signs that they were trying to enter the brood chamber of the hive – the hives were hit by a vehicle or an ATV and scattered.”

If it was someone on an ATV, the company spokesperson speculated that he likely received a number of stings from bees trying to protect hives.

These particular hives are used in the company’s educational programs for teaching beekeeping and for research on honey production and bee health.

“Today is a sad day for us,” Swan said. “It would be a sad thing to see happen anywhere, but it hurts a little more when it’s just in our own hometown with our own bees.”

The incident has been reported to law enforcement and the company plans to salvage whatever can be salvaged from the damaged hives.

More articles from the BDN