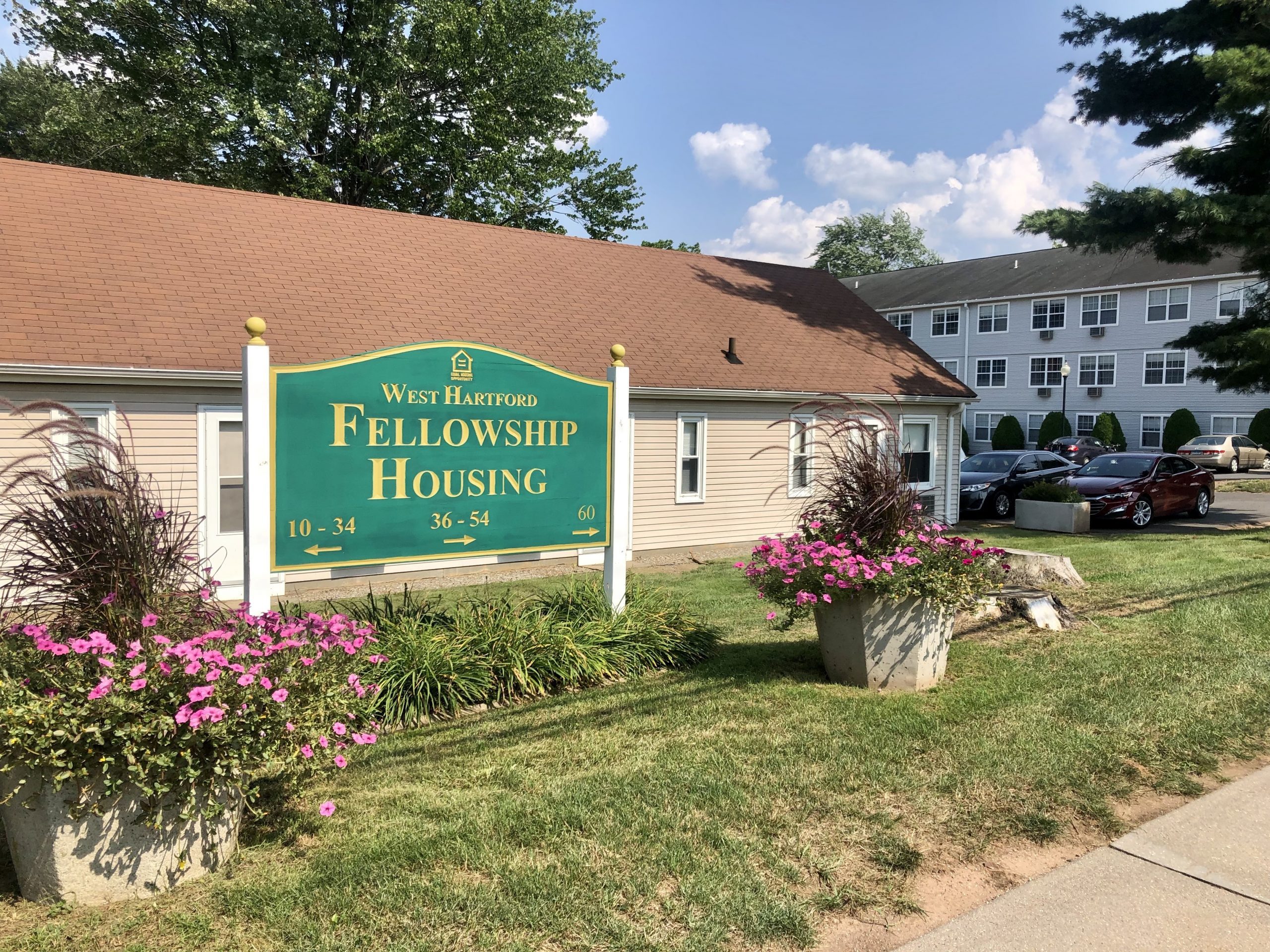 The building on the right is part of Phase I of the West Hartford Fellowship Housing redevelopment. Image courtesy (photo from file we-ha.com)

West Hartford Fellowship Housing (WHFH) has received low-income housing tax credits and its executive director has announced that the first phase of a redevelopment project that will ultimately add 88 affordable housing units to West Hartford will soon begin moving from the front.

The granting of $1.8 million in federal tax credits will pave the way for an investment of $18 million, a substantial portion of the $28 million cost of Phase I of the project.

“I want to thank Governor Lamont, the Connecticut Housing Finance Authority and the Department of Housing for their support,” said WHFH Board Chairman Leon Davidoff. “We are grateful for this award, as it makes possible the preservation and expansion of affordable housing in our community. »

“That’s the lion’s share of what we needed to get Phase I started,” executive director Mark Garilli said Tuesday.

The rest of the capital stack will likely include funding through grants, HUD loans and other investments, Garilli said. The combined value of the four phases of the project is estimated at $100 million.

The WHFH redevelopment has been in the planning stage for many years and was widely considered and unanimously approved by West Hartford City Council in September 2019.

The bulk of WHFH was built in 1970 and currently comprises a total of 213 affordable housing units, spread across 24 buildings. Residents are 65 or older or have a disability.

Some of the units, located on 9.04 acres of city-leased property at 10-60 Starkel Rd. in Bishops Corner, are Section 8 housing, and the others are leased for below-market rents, which in 2019 ranged from $400 to $650 per month including utilities.

The overall plan is to demolish 23 of the 24 existing buildings and build six new ones – in four phases – while expanding the development to 300 units that are larger and much more modern than the current apartments, with better insulation, energy – des efficient features, community gathering space, first floor laundry facilities in each building, and plumbing for washers and dryers in the unit. WHFH Development said in an announcement that they are “pursuing all available green initiatives, [and] taking full advantage of renewable energy systems, high-speed internet and sustainable programming.

The entire property will continue to be designated as affordable. 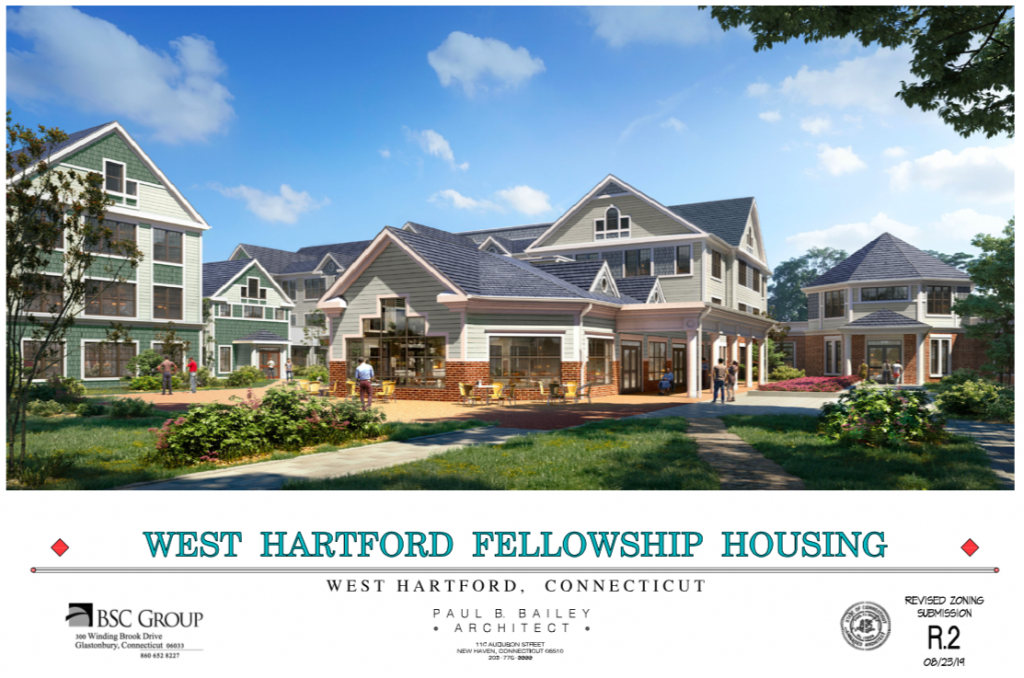 Common areas, including a courtyard, will be part of Phase I of the West Hartford Fellowship Housing redevelopment. Courtesy photo (photo from file we-ha.com)

“In Phase I, 21 residents will need to be temporarily relocated to allow for the demolition of three existing buildings, to accommodate the site of two new buildings,” Garilli said. One of the new buildings will face Starkel Road, and the other will be perpendicular and face the driveway.

Phase I buildings will include 65 units as well as new common areas for community services and programs.

WHFH hopes to be able to temporarily house the 21 displaced residents in other units in the community, and they will be the first eligible to move into the newly constructed units once they are completed. Garilli said when units become vacant throughout the property, they will keep them open to accommodate temporarily displaced people.

Because additional units will have been created, as redevelopment progresses into future phases, other residents who will need to be moved for construction will certainly have a place on the property to live.

“Right off the bat, we’re adding 44 units,” Garilli said, and each subsequent phase will add more.

“It took years of thinking to get to this point,” said Clare Kindall, former West Hartford City Council member and chair of the WHFH Development Corporation board. “We thank Mayor Cantor, our city councilors, city staff and our entire state delegation. This was only possible thanks to their unwavering support. We are more than grateful.

“We aim to innovate in the spring [of 2023]”, said Garilli, and now that the tax credits have been approved, the architects have been authorized to complete the construction documents. They will also secure the rest of the professional team and close their Connecticut construction loans. Housing Finance Authority (CHFA) ​​for the remainder of 2022. The Phase I construction schedule is 18 months, Garilli said.

WHFH Development Corporation’s existing team includes architect Paul B. Bailey and development consultant Millennium Reality Company. Construction Solutions Group (CSG) represents the owners and will oversee the design and construction process and ensure that the best interests of WHFH and residents are respected. Garilli is a CSG project executive and was appointed executive director of WHFH in 2021 and will oversee the project throughout the redevelopment.

Garilli said he was inspired by the commitment of residents, staff and community leaders to WHFH’s mission and their commitment to making a difference. “I’m excited to improve the lives of our residents, raise awareness and focus on fund development,” he said, to ensure the success of the project.

Barkan Management, the on-site property manager, is responsible for day-to-day operations and coordination with residents.

The newest of the existing WHFH buildings, a three-story structure built in 1990, will receive exterior updates but will not be demolished. This building, at 60 Starkel Rd. comprises a total of 44 units – studios and one bedroom and the development’s only existing two bedroom unit. Six are units accessible to people with disabilities.

Do you like what you see here? Click here to subscribe to the We-Ha newsletter so you’ll always be up to date with what’s going on in West Hartford! VSClick the blue button below to become a supporter of We-Ha.com and our efforts to continue producing quality journalism.